Have you been to Southern Utah? What is the traffic like?
Posted by The Calico Cat at 9:17 AM No comments: Links to this post

Vacation drama & we haven't even packed our bags yet.

This story is about traveling with food. We are traveling to Arizona & Utah. We keep Kosher at home. We are willing to eat vegetarian & fish out, but not meat - so McDonalds/Gas station fare is pretty much out for us. (Unless we want pure junk. Yes we can eat potato chips.) The national parks are not know to necessarily have vegetarian options & what they do have is pricey (Again, yes we can eat potato chips, but I don't want to pay $2 for a snack size bag.)- I understand the economics behind the pricing, that does not meant that I am planning on "buying" into it more often than "necessary." In addition to the Grand Canyon, we are hitting all of the major national parks in Utah & might even try for Death Valley in California. (Any Kosher grocery stores, stores with a kosher section - beyond a box of matzah? I'm not going to ask about Kosher restaurants, we barely have any of them here & we do have Kosher grocery stores & regular grocery stores with kosher sections? I'm not betting on it & we are flying into Las Vegas!) Unlike where we live, there are great spans of nothing out west - not even the aforementioned gas stations. (The high school that I graduated from is in Arizona - while I may be exaggerating, I am not OVER exaggerating. I am planning on driving 1+ hours without seeing much more that a landscape unlike anything we can see locally.) So I ordered prepackaged non-perishable food for us to eat in the car or on a hike or when the park food options are not open or too busy. (I've read that reservations may be necessary at the Grand Canyon lodge for dinner, I've been in long lines at other national park concessionaires.) It all arrived in plenty time & we felt like we had a good mix of healthy & fun (aka distracting from the long drive) food stuffs, while also having options so that we are not stuck with PB&J every day. Our hotel in Las Vegas is willing to accept a box - yay, I don't have to try to pack food in addition to the other stuff of travel. So Last Friday, late in the morning, I dropped off a box at UPS. Giving them 7 days to traverse roughly 2,400 miles. That is less than 350 miles a day for a company that makes its money by delivering packages. We will be driving those kind of miles without the benefit of a paycheck or profit to incentivize us. So why am I going on & on about this (Thanks to anyone who is still reading.) Yesterday, my husband got an alert that the box would not arrive in Las Vegas on Friday. Since it was sent UPS Ground, it would also not be delivered on the Saturday. Quick thinking as my husband is known for he goes into, ok lets have it sent to our hotel in Page, Az. instead. Since Monday is a holiday, it wouldn't make it to that hotel either. After not too long, we decided to have it returned to sender. (AKA Washington, DC where the food, water bottles, hats, etc. would not help us while in Utah.) Which brought us right back to the initial food issue! I have repurchased some items & they are supposed to arrive tomorrow. I will be packing them into our 3 bags - because if I put them all in one bag, that is the bag that is bound to get sent to LA instead of LV. (Heck that is too close - they'd send it to Anchorage instead!) Officially on a cruise, you can order kosher meals & they have vegetarian options. (But you can't get to the Grand Canyon on a cruise.)
Posted by The Calico Cat at 8:07 AM 3 comments: Links to this post 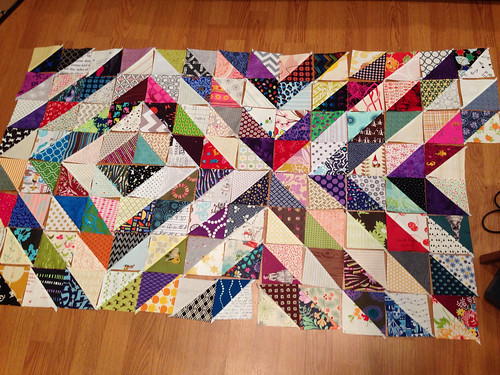 This is how I want to sew my half square triangles together, only I'd prefer to have the "bulls-eyes" to be off center to each other - this photo shows them straight on. I'm still playing & toying with ideas, another is to have a "bulls-eye" of one size and a bigger one next to it... It takes a lot of though when laying out those triangles. & this is only about 10% of my triangles, so I have lots of opportunities for designing. Also I am setting aside the ones that aren't up to snuff contrast wise. So I guess that I'll start by sewing one "bulls-eye" maybe 2 & then try to fill in around them... Any opinions? What would you do?
Posted by The Calico Cat at 1:59 PM 2 comments: Links to this post 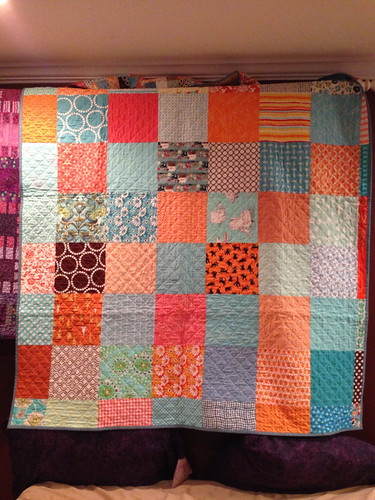 The quilt totally did not want me to take a photo of the back. This is a good representation - scrappy squares of orange and aqua. 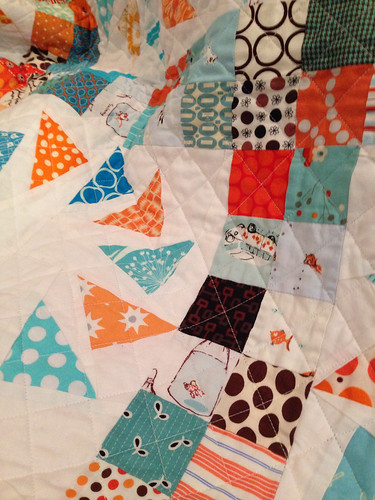 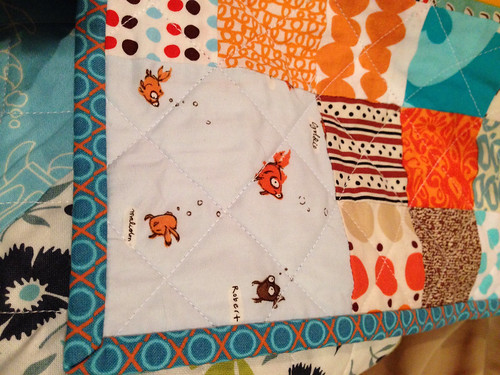 The inspiration fabric & the binding. 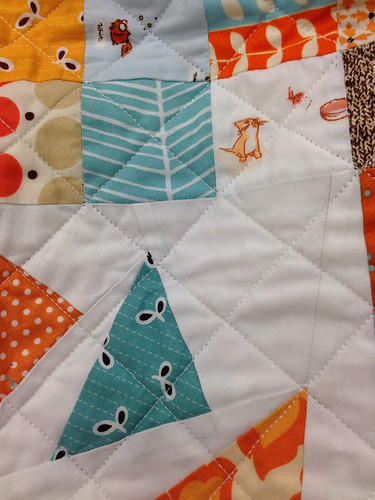 My favorite Heather Ross print - "free to a good home kitties." (I'm willing to pay top dollar for some more in poplin.) 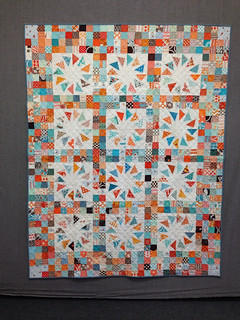 Posted by The Calico Cat at 7:31 AM 10 comments: Links to this post

quilting - on a quilt blog, I know, I know

About the pudding post - I had it better formatted - I don't know why it posted as 1 big block of text... This is the top that I pieced today: 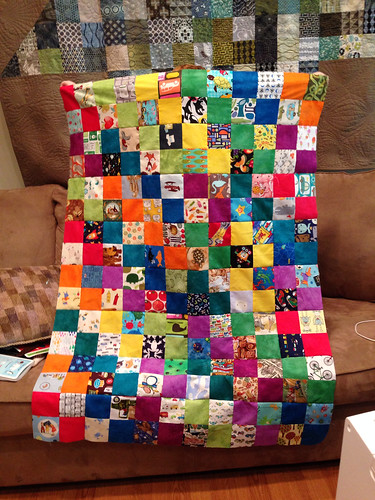 This is who held it up for me: 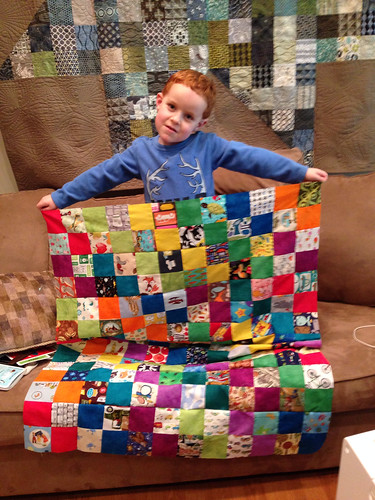 I likes the orca & the whale - which is why I've been purchasing aquatic prints. (That is my excuse & I'm sticking with it.) BTW the Hand Dyed fabrics are by Vicki. 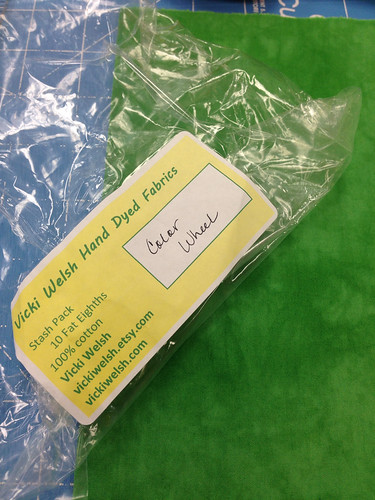 I won the pack when working on this project: 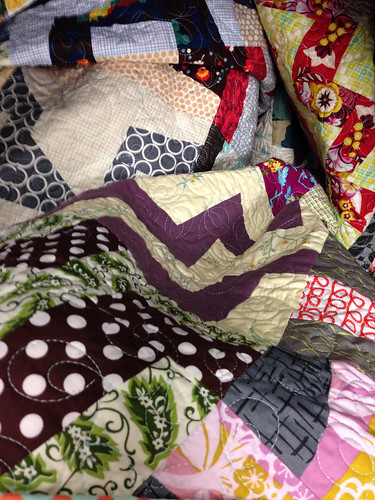 Sorry it's not a better photo. Hopefully it is good enough to hang from the rafters at out county show - then I can get a really good full shot. (If not, I do plan on hanging it in my living room where we have 12 foot ceilings, so a majority of it will show - if not all of it.) I wasn't going border that top because I thought that it would fit a batting scrap - it is a bit too big for the scrap, so I might will add the border yet. I ordered the border fabric, it is a blue/green tossed alphabet print. I'll have to see how it looks in person with the top. I ordered some batting from - the store that we all love to hate - walmart - @$10 for a twin size batt - warm & white brand. I have several pieces of fabric that I plan to use as twin size backs - 6 yards or two 3 yard cuts. Now to make some twin sized tops.
Posted by The Calico Cat at 5:25 PM 4 comments: Links to this post

Do you make pudding?

I've been craving pudding for a while now. The boys went out to get some new shoes, so I decided to make some pudding! Here is my recipe (I added to a basic old fashioned recipe that I found on the cornstarch box): Ingredients: 1/4 cup (30 grams) cornstarch 1/2 cup (100 grams) sugar 1/8 teaspoon salt 3 cups (710 ml) whole milk (I use skim) 6 ounces (170 grams) semi- or bittersweet chocolate, coarsely chopped (or 1 cup good chocolate chips) (I also use cocoa powder - 1/4 cup - 30 grams. I like a strong dark chocolate flavor) 1 Tablespoon (or more) cinnamon (I think that cinnamon makes "everything" especially chocolate taste better - other people add coffee - I add cinnamon. 1/8 teaspoon cayenne pepper (Next time I'm going to use 1 teaspoon. Yep, I'm skipping 1/4, 1/2, & 3/4!) The "local" ice cream shop has "Aztec chocolate" that has a bit of heat, so I decided to try to replicate it without alienating the other consumers in my household. I can't taste 1/8... 1 teaspoon (5 ml) pure vanilla extract Method: Combine the cornstarch, sugar and salt (This is where I add in cocoa powder, cinnamon, & cayenne pepper) in a medium saucepan, Slowly whisk in the milk, in a thin steam at first so that lumps don’t form, then more quickly once the cornstarch mixture is smoothly incorporated. Place over medium-low heat and stir occasionally, scraping the bottom and sides. Use a whisk as necessary should lumps begin to form. After 10 minutes or so (slower over lower heat is better, to give the cornstarch time to cook), before it starts to simmer, the mixture should begin to thicken, enough that it will coat the back of a spoon. Add the chocolate chips, and continue stirring for another 2 to 4 minutes, until chocolate is fully incorporated and mixture is quite thick. Remove from heat and stir in the vanilla. It was so good warm... (I added a dollop of plain greek yogurt & a handful of walnuts so that my snack was a little more well rounded...) The best part - 1 cup was enough! (Some other treats allow me to eat 4-5 servings.) I started to sew on the baby quilt & as soon as I publish this, I will return to it.
Posted by The Calico Cat at 2:34 PM 2 comments: Links to this post

A card from my little one. :o) (I also got a necklace, a plant, & a framed photograph.) 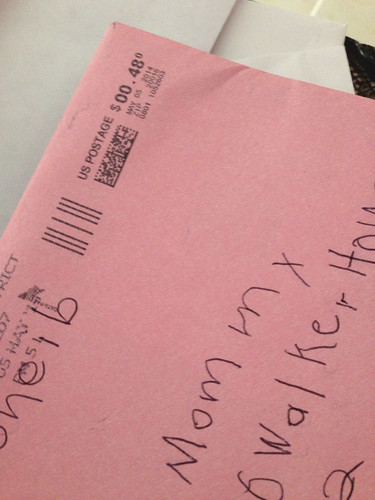 Just got home from his swimming lesson, I'll go to the gym for about an hour in about an hour & them we get to do some chores & maybe even some sewing for Mother's Day. I need to drop of a crib size quilt on Friday for long arming - I finished cutting for it yesterday while at the DC Modern Quilt Guild meeting. Do you have plans?
Posted by The Calico Cat at 8:15 AM 2 comments: Links to this post

flickr no longer supports blogging directly & I've been too lazy/busy to go into the blog to post... 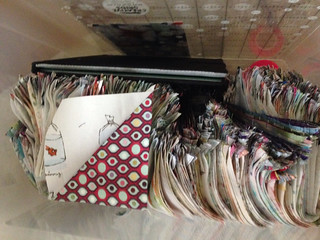 I haven't actually worked on these in some time - what I want to do requires a design wall or a large block of time & I don't have either... Vicki's HSTeria might motivate me to work on them... (They are light dark - I took the mediums out & have them sorted for warm cool.) I've added hanging sleeves to some quilts - getting ready for fair season. I'm getting ready for my vacation out west. How about you?
Posted by The Calico Cat at 5:44 PM 3 comments: Links to this post