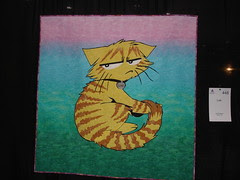 So I took my sick baby (ear infection + the expected amoxicillin related reactions) to the Lancaster Quilt Show. (His disposition was fine - many people remarked at what a happy baby he is.) I had to see how it would be since AQS is putting it on now (at least for this year.) It was a nice show & the venue is improved, but.... (Yes, there is always a but.)
I hated the shuttle. I also hated that the directions sent you to the visitor's center & not the convention center.
So I waited to leave until my baby woke up & had breakfast & for the mornig rush hour traffic to subside a bit. (leaving at a time that can only bedescribed as later than optimal.)
The drive to Lancaster was uneventful this year (last year, I missed my turn & did not realize it for about 100 miles - luckily I did not have to back track.) until I got to my "destination." I did not see a convention center, so I stopped into a hotel & asked, "Where is it?" & Heard, of you need to go to this parking lot and catch the shuttle. (What did I forget in my car - change of clothes for my baby & a blanket to help him get to sleep at nap time.)
The wait for the shuttle could have been longer (that is a positive by the way). & the crowd waiting for the shuttle could have been bigger (another positive.) They nicely left the front seat open for the gal carrying a baby, diaper bag, lunch bag & back pack. - some of that stuff would have stayed in the car under non-shuttle conditions. (The stroller was under the bus.)
It was nice not having to drive into the center of Lancaster (but I should have done it anyway!) and finding parking garage.
Since I arrived at lunch time, we started the day out by eating the lunch that I smartly packed. (I only forgot my beverage.) Now to find an elevator - & to wait for the working one...
(There wasn't a family restroom on the main floor.)
Luckily I walked in & saw this quilt (My favorite) - that improved my mood a bit.
Overall I did not find myself taking as many photos as in the past... (Quite a few of the quilts did "nothing" for me... But the ones I liked I am glad that I got to see them - especially the special exhibit in which you could not take pictures.)
I found the family restroom in the NICK of time!
& Because I did not see Pinwheels (a vendor that I visit at most of the big shows) I off handedly asked the guy manning the door if that was "it?"
No, it was not - but if I had not asked, I would have missed floors 2 & 3 - POOR Planning or something on behalf of AQS & one of the vendors that I talked to on the 3rd floor felt the pains of the poor planning. & The 2nd floor was so dark...
A couple more diaper changes - one should have necessitated a change in clothes - but my car was no where close enough & I managed to forget the change of clothes in the car... The other definately necessitated a change in clothes - on top of the accident, while putting the soiled clothes in to a wet bag, we had another accident - soaking the rest of the clothes - socks included. So I put his jacket on & slipped my jacket onto his bottom half with the sleeves around his legs - classy I know.
I then got to wait for the shuttle - knowing that I would have to figure out how to unwrap the baby to get the stroller under the bus. The driver lowered the bus onto the curb - so there was some drama & yucky metal on cement noises to fix that. & there was the drama from the people who needed to find the other bus & there were the inevitable knocking on the door last minute people adding to the delay in getting the shuttle bus to the cars. (In "rush hour" traffic.) Luckily the weather was nice - only a bit cool - because I changed the baby in the stroller before getting to the point where I could reload the car & try to leave Lancaster. The only problem at this point is that I was about 1.5 hours behind schedule.
So we stopped for dinner instead of making it home. That added another 1/2 hour onto the trip. & he completely soiled his last outfit while eating his dinner. So I put him in his sweater & draped a blanket over his lap for the last leg of our journey.
Oh that journey took 5 hours instead of 3 because of all of the shuttle/traffic/etc. issues.
I don't think that I will be going to Lancaster next year... I need to have my car close enough to have supplies at the ready.
(Yes, Jacob has a diaper rash on top of the loose stools - so he was really happy with all of the bum wiping yesterday...)

So I am going to Lancaster today. I went to the site for directions too and noticed the visitor center thing. I was questioning that too. So I searched longer and then noticed that right above the directions to the visitors center is the directions for the convention center. Small albeit, but there. I, too, was a little disturbed by this. But I am looking forward to the show since it is the first year for AQS. It sounds like you had quite a long day and must be quite tired. Hope Jacob gets some rest with you.

So GLAD I decided against going this year! I am going to Hershey for sure since I really enjoy that one. Smaller crowd, enough vendors that are not jammed together and all in one place.

Sorry Jacob has a bad belly and bum. Hope he feels better soon!!

Sorry about Jacob-poor little Dear.
Where was the show? I've been to the show many times but it was in the hotel for years and there was plenty of parking in the back. Was it in Lancaster proper? That's a pain to drive through. Lots of one way streets. Freaked me out first time I went there to the Quilt Museum.

You're brave for making the trek anyway. I'm glad he's a good baby to get to go with you. The antibiotics always did a number of my kid's stomachs too.

Oh dear.....I see why you posted that particular pic. What an adventure you and baby had to endure. Sounds like that wasn't much fun....good planning with the lunch....bless your heart.
Hope baby "J" gets to feeling better soon.

Oh my goodness. What a trek just to see a quilt show! I doubt I would have been able to endure all you went through. Hope Jacob is feeling better.

It sounds like an interesting !! day!!! Love that cat quilt. Thanks for telling us all about it!