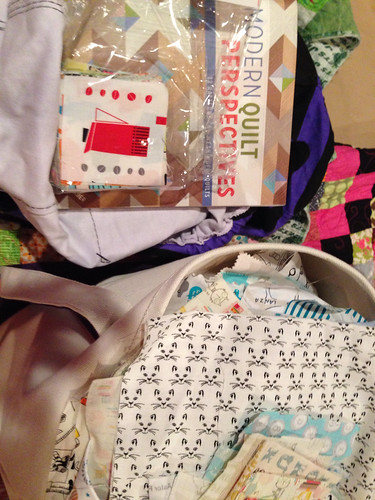 That black & purple bag holds the missing UFO. On top of the book, background, & baggie of novelty charms was a pile of novelties that needed to be trimmed down.

When I was trimming scraps for 1 of a 1,000 other projects, I tossed the novelties in to the purple & white bag.

The other night when I felt like trimming charms, I grabbed the purple & white bag assuming that the UFO was under the novelties that I had been tossing in here & there.

It wasn't but it is all sorted now & while I found the missing bag I found some lights for my flying geese backgrounds. So my "It probably already has too many pairs" flying geese project has 18 more pairs.

How could I not include this one? 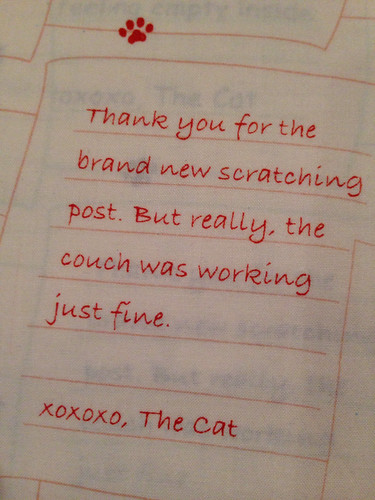 I had it in black & knew that I had it in red & blue, but... Now all three will be in the quilt & that makes me happy as a squirrel who just found a forgotten nut stash!

More is more - is the only explanation that I have for my scrappy projects.
Posted by The Calico Cat at 8:48 AM 1 comment:

This photo was taking on our long hike to Delicate Arch in Arches National Park near Moab, Utah. Jacob called the cairn a "rock snowman."

He starts Kindergarten next week... I have a feeling that I am taking that transition far harder than he is.
Posted by The Calico Cat at 12:47 PM 5 comments:

Somehow (not really Carla mentioned her) I got hooked on watching Eleanor Burns, current stuff & seriously old stuff. & decided to buy a couple books & a lot of rulers. (Am I repeating myself?)

Now I am embarking on the great flying geese/stars making binge. I am starting with medium (I honestly don't recall the end size - oops) flying geese - scrappy dark & medium geese with scrappy light skies (hoping for good contrast throughout).


With that scheme in mind, I spent the better part of 2 days to draw the line on the back of these squares. I sure did go through a lot of pencil graphite (I really wanted to type lead, but pencils are no longer filled with lead & may have never contained lead my pencil using lifetime. I probably should ask Mr. Google.) While those enticing brightly colored pencils sat waiting for me to draw a few more line - no mere mortal could have done them all in one sitting - a pair of blue eyes spied them. I caught him staring & said, "Don't touch my pencils." Well that is all it took, he could think of nothing more than to grab those pencils. He eventually did, but did not take them away, just giggled at being able to grab them.
(I know that tape player is not a pencil, but...)

(not the best action shot.)

How many lines did I draw - probably close to 400. I quit counting the background squares at 250, but I know that I added at least 100 more.

What can I say, I don't make small quilts. With that said, my plan is to fashion these into at least 3 quilts, one will be wonky, one will be as perfect as possible & the last one will possible be the blend of both...

I'm also preparing for 2 completely different scrappy small stars quilts. I've pulled the big squares & have started to cut the small squares, but I won't start drawing lines until I have the first batch sewn. (Ha, yeah, I'm believing that one too.)

Based on the first quilt described above & the fact that it took so long to draw the lines, how long do you think it will take to sew the lines?

& While I'm asking questions, why can't I find that other UFO?

Did I show you my love note?

What about my son's travel plans? 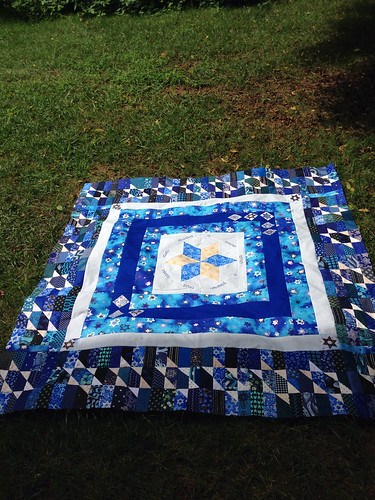 I finished a commissioned quilt top! I'm going to drop it off with my local long armer today or tomorrow.

We went back to the fair yesterday & I got an extra prize, but not the rosette that I thought I might have gotten. Oh well, better luck next year, right?

Closer shot of the commissioned quilt (it is a wedding canopy - chuppah): 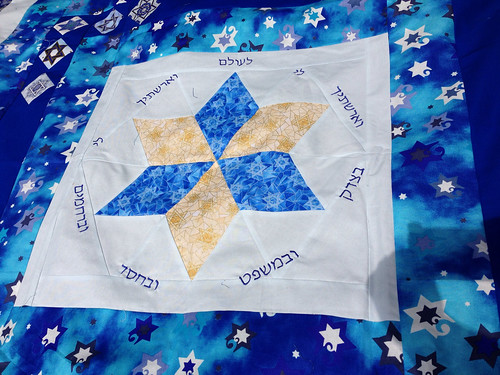 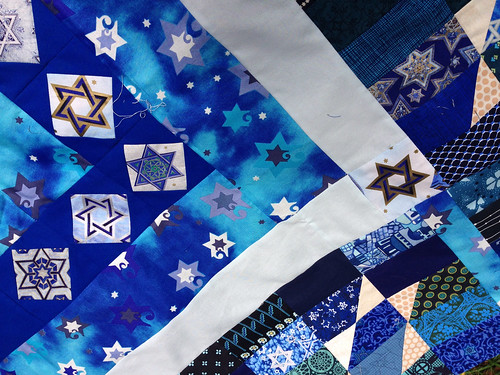 & a white & a honorable mention. (The big prize that I would like to win had not been awarded yet, so there is still hope.)

The fair has a lot of  divisions which appear to have sub-divisions & when you are looking at the fair, it is impossible to tell what divisions/sub-divisions were up against each other...

Also you were required to add a hanging sleeve to full size quilts. I feel like I added them for hours, only to have 2 hang. (Not the blue ribbon winner mind you) Meanwhile the Chairwoman said that if my small quilt had a sleeve it would have hung. Oh well. (Funny thing about that small quilt, it won a blue ribbon, but was displayed with the back showing. She had it fixed. Meanwhile, what idiot thinks that had embroidery is meant to be on the back?)

My little one isn't "thoroughly" into the rides, but he does like them so we rode a few.

His favorite is the ferris wheel. I think we stood in line for an hour waiting for our turn.

It really is the simple things.

I got some super yummy peaches & we supported the 4-H bake sale. ahem.

edited to add:
We saw a 3 hour old calf. Previously I had only seen very heavily pregnant cows at the fair. (The photo has not made it to flickr yet.)

Capped it off with a lovely dinner where my little man & I exchanged love notes.

I entered several quilts into the county fair including the one above.

(I had so many other things to say when I started this post. Now my brain appears to have gone on vacation.)

We went to another local fair last weekend, but we arrived when they were judging the home arts, so no photos of "other peoples quilts." But that was the first fair where my son asked to go on a ride. (Dutch Wonderland "ruined" our "cheap" fair experience. Tongue in cheek)

So on Sunday when I go to see if I won any prizes, I will have my "I hate quilts" son wanting to 1. eat & 2. ride the rides. (Last year he yelled, "I hate quilts" at the fair. He was hungry. I don't believe it was a truthful comment - we have since survived a couple far bigger quilt only no rides & animals for distraction quilt shows.) I guess we should hit "the Grilled Cheese" first.