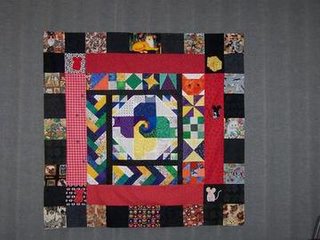 This is a UFO of mine that I really would like to finish... But it is not "big enough." I have several ideas on how to grow it bigger, but have I gotten a "roundtuit." Heck no, this photo was taken several years ago & it is in the same state on undone.

This was a mini-group project.
I did the twisted tails block in the middle - the only fabric repeats are in the triangles. (My only rule was to keep it scrappy.) My friend Kathy added the braid on two sides - and repeated the fabrics..... (At which point I wish my "rules" stated that the round had to go all the way around) Genie followed my ruled to a "T." no repeated fabrics & several different blocks. My friend Deborah does not care for cats - so she added the red round and the mice and cheese. Finally, my friend Nancy used her cat and black collection on the final border.

I wish I had photos of what I did to their quilts, but alas.... I know I did Baltimore Applique on Genie's quilt, I did piano key on Kathy's quilt, Drunkard's path on Nancy's quilt and a funky border on Deborah's quilt. (I appliqued a doily onto muslin, then cut it in quarters then used those "hearts" as the corners for a variegated blue border.)

My idea for adding to it is to do a narrow border of this fabric that I have that has balls of yarn on it. Then a piano key border useing my cat fabrics (They are cut out and waiting). Then my idea gets muddy, but I am thinking that maybe I'll use some swap blocks ("Hole in the Barn Door" blocks with cats in the middle) on the top & bottom - thinking rectangle is the shape I want....

Will this darn training ever stop? This one promises to be a sleeper - my supervisor chose it... I don't even want to know what it is about, it is bad enough knowing that it will last all day long!
Posted by The Calico Cat at 7:54 AM

Loved the cat "top". It would make a great wall hanging! I love that idea of the round robin quilt. Have to be trusting of what the others will do! Cool that you are getting your own machine! You'll love having a new one. When I got my Bernina it made all the difference. It is easy to quilt them myself, as long as there is a "line." But I guess once in a while I'll have to go to a longarmer. Hope I don't get spoiled! :)

Too cute. It might be nice if you could add some more red to the outer border to pull it together and 1 more black square with a mouse on it - maybe in a bottom corner! It is definately worth finishing!

What fun! I'd probably do another plain "stop" border to frame what's there now, and then your next pieced one. Those little mouseys are too cute! I've been in a couple of Round Robin swaps -- they're challenging!

Amy: Love your cat center! The whole thing is cute. Don't have any ideas how to make it larger though. How big do you want it to be?

How much longer do you have training?

Oh, I hear you. I've got a couple of round robins that are just too small; and its soooo hard to work on them once they come home as they're nothing like what I expected and I ahven't spent time living with them so they aren't "growing" in my imagination as I work.